on June 22, 2020
This is my second blog. The first one - La niche Priout - was going to be the original name of our chambre d'hote. There is a little niche high on the wall of the house with the virgin Mary standing inside, and not far away a lintel above a window is proudly emblazoned with "L.Priout 1854", which I hope explains the name La niche priout.

The blog for La Niche Priout started off with our decision to leave the UK to live in France, but then as we settled into moving mode, the blog sort of went out of the window. We finally moved here in May 2018 and we have now been here for two years.


We live in Le Hameau Durand, which is a small hamlet of eight houses including ours, one of which is currently empty. Our house is meant to be the oldest house in the hamlet. There is a map which helps to date the house to between 1785 to 1806, although we are sure that parts of the buildings are older. We live in a traditional Normandy "corps de Ferme", which is essentially a farmhouse with stables and barns and we have about an acre of land. Le Hameau Durand is in the village of Montpinchon, in the department of Manche in Lower Normandy.
We are an Anglo/French couple and we have been together for 15 years. We have one dog, Poppy, two cats, Coco and Kishka and four chickens, Quiche Lorraine (named after our old neighbour in Kent) Omelette, Scramble and Benedicte.
Why is this blog called La Bicyclette Bleue? well you see, Priout is still a name in the area and after thinking about it and asking other people, La Niche Priout didn't seem such a good name after all. This area is very popular for cycling and so La Bicyclette Bleue seemed like a better name - afterwards Freddy said it was the name of a book and subsequent tv series, but I didn't know that, so I'm not guilty. Sometimes after you've moved somewhere and found out about it, your views on certain things change, you live and you learn and I suppose that is what this blog is going to be about - our discoveries about the area, the house, France and running a Chambre/table d'hote, I discovered yesterday that d'hote means of the host and so chambre (room) d'hote (the French name for a bed and breakfast establishment) means room of the host and table d'hote (yes, you've guessed it) means table of the host - isn't that nice - my French improves slowly every day. 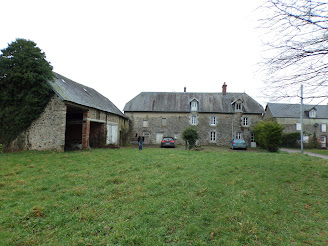 3 rd March 2021 When I first started this blog, I seem to remember that the plan was to add to it every week - oh well, the best plans of mice and men and all that........the road to hell is paved with good intentions! well, maybe not quite hell, but certainly procrastination.  20 th February 2022  …………and here we are again, almost one year later and I don’t think I even finished off the previous paragraph (I have now by adding - "but certainly procrastination" ) Rather than having the intention of a blog post every week, maybe one every couple of years might have been a little more realistic! I don’t think it is finding things to write about that is the problem, the problem is more to do with what not to write about – and the photos, they make it more interesting of course, visually describe what I am rattling on about, but they are such a pain to have to find and slot in amongst the words.  It is quite a reflective time at the moment, it always is at this time of t 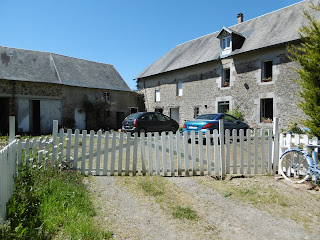 One of the reasons that we need more gravel Last week was a bit grim and grey. I seemed to spend the week weeding the driveway and updating the website. I need to weed the driveway so that we can finally spread the gravel that we bought, and I need to update the website because quite frankly, it wasn't too enticing and it needed corrections (it's getting there) The gravel being delivered in June When it rained or my back was aching too much or I'd simply had enough, I stopped weeding and carried on with the website. When the sun shone or my back was aching or I'd simply had enough, I stopped working on the website and went out to weed again. Freddy was painting and we both had given up on the list of things to do which we had written with all good intentions on the Sunday evening by the Friday. By Saturday Freddy had run out of paint and I had run out of patience with both the weeds and the website. Freddy had council meetings, we have more bookings for the ch